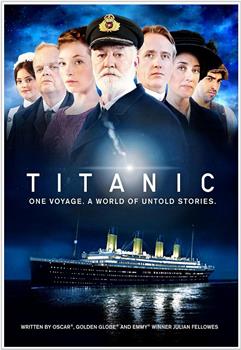 Episode one  The Earl of Manton and his family secure passage on the Titanic under a cloud of scandal surrounding his daughter, Georgiana. Meanwhile, there's tension between the English and American staff and crew man Jim Maloney attempts to smuggle his wife and children on board...

原文版报道内容：The producer of ITV&#39;s ￡12m Titanic mini-series has admitted the show&#39;snonlinearstorytelling, which sees the ship hit the iceberg in each episode, may have put viewers off the Julian Fellowes-scripted drama that has foundered in the ratings.

Nigel Stafford-Clark said it was his idea to have anarrativemoving back and forth in time, as a fresh approach to a well-known story. The ****-parter, which concludes on Sunday night, launched successfully with 7.4 million viewers, but had fallen to 3.5 million by the third instalment – fewer than saw a show marking comedian Des O&#39;Connor&#39;s 80th birthday which preceded it on ITV1. Stafford-Clark, a 30-year TV industry veteran with producer credits including Peter Kosminsky&#39;s Northern Ireland docu-drama Shoot to Kill and the same director&#39;s Bosnian war drama Warriors, said he was proud of Titanic, which focuses on different classes aboard the doomed liner in each episode. He had previously enjoyed critical and ratings success for a similar fresh approach with BBC1&#39;s 2005 Bleak House adaptation, which broke up the Dickens story into TV soap-sized half hour episodes. But he admitted Titanic had failed to woo viewers in the same way. &quot;I have to accept that people have found it hard to get around. In that sense I am responsible,&quot; he said.He also defended Fellowes&#39; work on the drama. &quot;The scripts were very good. Julian is not in any way responsible for this. He wrote the scripts over 18 months to two years, it was not done in a hurry. The series was sold off the back of the scirpt.&quot;